Hi English learners! Lori here, your teacher from Betteratenglish.com. In this episode of Real English Conversations, you’ll hear part 2 of my conversation with Kyla. We’re discussing a book that we both really liked. It’s called Daily Rituals, by Mason Currey.

The book describes the daily routines and habits of 161 creative people, people like writers, painters, musicians, philosophers, and scientists. Now, while I love the book, I don’t recommend it for English learners at lower levels. This is because it has a lot of quotations from sources that are very old, and some of that language is very difficult. But if you are an upper-intermediate to advanced learner of English who needs to read English literature from different periods, it might be a great place to start. The chapters are very short — sometimes only a half a page. That means you can have the satisfaction of finishing a chapter without having to spend too much time. And it’s easier to do deep language analysis and study if the text is not too long.

Right then…in this conversation you’ll hear a lot of American English idiomatic expressions and a bit of slang. There are also many examples of a politeness strategy called “hedging.” Remember, this was the first time Kyla and I ever spoke, so we were being careful not to be too direct. Listen particularly for language like “kind of,” “sort of,” and “I think.” Hedges like these keep us from sounding to direct or firm in our opinions.

As always, you can find the full transcript, including a bonus vocabulary lesson at betteratenglish.com/transcripts.

CONVERSATION TRANSCRIPT
Kyla: Well, I was just going to say, that book came out of blog posts, didn’t it? Like, was he blogging? [note: you can find the original blog here]

Lori: I believe the story is, he’s – he’s a…he’s actually a published author; quite a prolific author, I think, in– in, like, magazines and things like that. And he did have this blog that, I guess, started out just as some kind of personal interest.

Lori: And then someone got in touch with him saying, “Hey, do you…this would make a really cool book,” and so he did the extra work too to turn it into a book. And I’m glad he did because it’s really fascinating.

Kyla: I was– I was just going to say, it actually kind of makes me really…”Why wasn’t I a writer?! It seems like they have it so easy!” [laughs]

Lori: [laughs] Is that based on– on reading about the habits of writers in the books or the book, I’m —

Lori: That’s funny you had that reaction because I actually thought that writing seemed really, really freaking hard.

Lori: [laughs] Like, really hard. I guess, some of the things that– that struck me that all the things that the writers do to try to make it easier on themselves, like, I really [laughs] — one thing, I can’t remember which person it was, but there was someone who was, like, totally taking Benzedrine which is, I guess, apparently, Adderall.

Lori: And after reading that passage, I was like, “Hey man! I want to get me some of that stuff! [laughs] How can I…that’s my problem too! I can’t focus. I can’t concentrate. Like, sign me up!” [laughs] And coffee, as well. I was surprised at how many people really depended on stimulants like coffee. 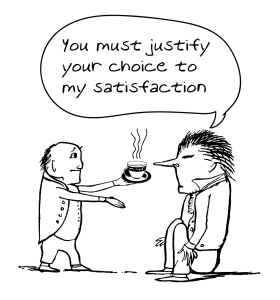 Lori: Yeah. Can you imagine working for a dude like that? Like, that’s part of your job, is to choose the cup and then explain to his satisfaction, “Why?”

Lori: That was the cup of the day. Yeah, I can’t…I remember the – the passage but I can’t remember who it was, actually.

Kyla: That was exactly that but…

Lori: But yeah, hilarious. But what was it that you think…I mean, you’re obviously a creative person; you play guitar, you mentioned you’re– you’re creating an app and learning coding.

Lori: What it is that you think drives people to want to read a book…like this?

Kyla: [laughs] Well, definitely you want to know what other people like. “What other people are doing? What’s working for other people?” Maybe someone else has…you know, other creative people have clearly dealt with the same problems I’m dealing with, so “What– what is that other person’s solution?” I think that’s a big drive.

And one thing that I didn’t…I wasn’t expecting to get out of the book but that I really…something that I really appreciate about this book is, you sort of feel a connection to other people. You really realize, “Oh yeah. These, like, creative people all go through the same problems and have the same, sort of, obstacles they need to get through; they need to defeat.” But then also I was really…I guess, someone who’s always had a job or various jobs to keep the bills going, it was really inspiring to read about how many…like Mussorgsky, he was a pharmacist. He had a family and a 9-to-5, and he managed to, you know, compose a huge body of work that’s still listened to and enjoyed today. And it kind of really made me feel better about how my life is going, I guess. And the amount of…yeah, the amount of creative people who are like, “No, we just need to find a little bit of time every day and we are able to create and still, sort of, go about keeping a regular life.”

Lori: Yeah, I thought that was really striking in the book as well. That the idea that even if you do have to work a regular job, you know, just to pay the bills and, you know, we all have to, to pay our bills and earn a living. And then maybe it’s nothing to do with the thing that– that you burn for, you know, with your– your creative passion. That even if you can just find the little time you can every day, or maybe not even every day, maybe a few times a week — that those hours add up… 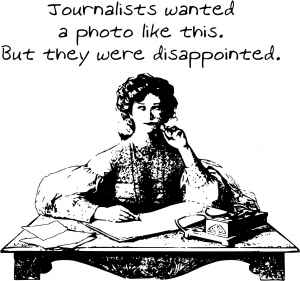 Lori: …over time. And like, even, I think it was…I think that’s how Agatha Christie worked as well. I mean, who – who is like super, super, super prolific and successful by any measure. She was basically just this married woman who was even kind of embarrassed about being thought of as a writer, or just found the idea of writing embarrassing. And she would sort of sneak away whenever she could to some quiet, undisturbed place. And I guess it even frustrated journalists because – later on when she was successful – because they would want to take a picture of her at her writing desk and she didn’t actually have one. [laughs] But it was surprising how just that, that little bit every day and people who stick with it; they eventually are able to create these great things.

Lori: It’s inspiring for those of us…

Lori: …who don’t have the luxury of just devoting every day to the things that interest us.

Download the PDF transcript for the vocabulary lesson and language usage notes!