Introduction
Hi, Lori here welcoming you to another episode of Real English Conversations from BetterAtEnglish.com. Today’s conversation is about some of the differences between American and British English usage when it comes to telling time. This conversation also marks the first appearance of my very own mom here on B@E. She give us her perspective on American usage, while my English friend Michael (whom you know from earlier podcasts) returns this episode to cover the British point of view. This episode follows directly from the previous episode, number 44, so if this is your first time listening to our podcasts you should listen to episode 44 first.

The pdf that goes with this episode contains the full transcript, the vocabulary list, the image of clocks that I used to elicit time expressions from my mom and Michael, and some usage notes about time expressions in British and American English. You can download it directly in iTunes, or visit betteratenglish.com and download from there. I think that’s enough introduction for today — let’s get on with the conversation!

[Lori:In this informal language experiment, I showed my mom a picture of four clock faces and asked her to read me the times. This was to see what prepositions she would use, particularly if she would avoid the preposition past as Yvette’s former teachers claimed Americans do.]

Mom: OK, well starting on the top left I have ten m minutes after nine, and then the next one to the right is twenty-five after seven, and then on the bottom left is five past six and the last one on the bottom right is a quarter past twelve. 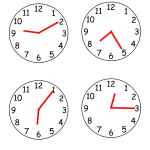 Mom: Wow, I got 100%! I do know how to tell time on a regular analog clock!
Lori: OK…now this is very interesting because you are a native American speaker, and you haven’t had…I doubt you’ve had much exposure to British English and definitely not ever had to teach English using British English materials or anything like that.
Mom: No, for sure.
Lori: Yeah, the problem is..is that sometimes when non-native speakers are learning English, teachers will tell them misguided rules that they maybe read in some outdated book somewhere saying things like, “In American English you have to use after when you talk about time; you can’t use past.”
Mom: Yeah, I think one time I said past..I think I said five past six. In fact I purposely said past because I was trying to give you some variety of the difference…we can tell time…because Americans will say past.
Lori: Yeah! That’s what I think as well, that I…maybe naturally I’d be more likely to say after but I wouldn’t think it was weird or strange if someone said past.
Mom: No…no, that’s exactly…’cause…I think the first couple of times I said after and then I thought, “Oh I’m going to give her a little variety,” so I’ll say five past six because we do say that, but it’s…I mean we wouldn’t think it’s odd.
Lori: OK, that’s great, and that’s really just the point I wanted to make… that often…
Mom: In fact I think we especially do it with with…on the half hour, we say half past twelve.
Lori: Right, right, half past twelve, definitely. Yeah, you wouldn’t say half after twelve.
Mom: Nuh-uh, we always say past for then. See, we use both.
Lori: And the interesting thing is I used analog clocks on purpose because I was worried that if I just wrote the times in digital time you would have said, for example, seven twenty-five.
Mom: Exactly, ’cause that’s what you see on a digital clock.
Lori: So anyway, that was my little experiment!
Mom: OK!

[Lori: After doing the experiment with my mom, I went on and did the same experiment with Michael to get the British perspective.]
Lori: …and read the times that you see on the clocks.
Michael: Yeah, it’s ten past nine… that’s from the top left. The top right is twenty-five past seven. The bottom left..err..five past six, and the bottom right one is quarter past twelve.
Lori: OK, cool! You’ve also scored 100%. You can tell time on an analog clock!
Michael: [laughs] Yay!
Lori: And the reason that I asked you to do this is…I had a discussion with Yvette the other day and she remembered learning when she was studying English, umm — she’s had both…been exposed to people, you know, trying to teach her British English and American English — and she somehow was told that if you’re going to speak British English you have to say past just like you just did, like, it’s ten past…
Michael: It’s true as well, it’s..in fact, I can tell you that…I mean she’s absolutely right. I mean, never mind the experimenting, that is how we are taught. And I’ve never heard anybody say ten after, you know, three or something like that until I met an American person.
Lori: OK! OK, but did you still understand it the first time you heard…did it cause any problems?
Michael: Oh it didn’t cause any any confusion… you say 10, you know five past, ten past quarter past, twenty past, twenty-five past.
Lori: Uh-huh.
Michael: And when it’s around it’s around, it’s twenty-five to, twenty to, quarter to, ten to, five to…
Lori: Right.
Michael: But I’ve heard some American people say ten till..
Lori: Oh yeah, ten till six, yeah quarter till, um-hmm.
Michael: You never ever ever ever ever say that in British English, it’s always past and it’s to and it’s drummed into you.
Lori: OK, that’s quite interesting.
Michael: There’s no variation whatsoever, but people can understand obviously, I mean you’d have to be a bit of a [bleep] jerk to…
Lori: Um-hmm.
Michael: Being deliberately obtuse if you’re going, “Huh? I don’t get it.” You know, because it’s obvious to anyone with half a brain, you know, what it means. But it is…it stands out as being unusual ’cause this is… yet we have this little clocks with the, you know, the movable hands.
Lori: Yeah, analog clocks.
Micheal: Yeah!
Lori: In fact, I was quite cunning when I made the picture to send to you. I made…I used analog clocks on purpose just to elicit the preposition past, ’cause if I had just written the times, like in digital format, you probably would have said things like…
Michael: Nine ten…yeah. But I don’t…I don’t say times like that anyway. I always do it the old-fashioned way. even after the advent of digital things because my dad would belt me if I said it, err, you know, the digital way, I’d… seriously, I’d get in trouble when my parents would yell at me.
Lori: Oh, that’s funny why, why…Did they ever say why they didn’t like it?
Michael: Yes, they felt it was dumbing things down, err, and it meant that you know you wouldn’t be learning you wouldn’t know how to tell the time properly. Err, because if you just read it out like that…err…and…I mean I think they had a very good point, because if you, you know, if you only knew how to tell the time like that and then you were at, oh I don’t know, some big train station somewhere where they had an analog clock and you’re going, “Oh, umm, let me work out bla bla bla,” you know, it’s…it’s not so good.
Lori: Yeah, it’s definitely, I think, everyone needs to know how to tell time on an analog clock but I wouldn’t go so far as to force people to use that every time they were talking about time because I think the digital system is so established now and it really makes perfect sense.
Michael: Yeah, and my, I mean, I can hear you hang on my parents are total [bleeping] Nazis when it comes to…
Lori: [laughs in disbelief]
Michael: But anyway… I love them but they’re…you know…misguided in the extreme.
Lori: You know I’m going to have to bleep you out now.
Michael: [laughs]
Lori: We’re not recording for Uncensored English!

That’s all for this time. Of course, in these spontaneous conversations we can’t cover all of the usage issues that apply, and sometimes the examples we come up with on the spot might not be the best from a teaching perspective. So to make up for that I’ve added some extra usage notes to the pdf file for this episode. I hope you find them useful. Thanks for listening, and bye for now!

See the PDF for the Vocabulary list and usage notes.