Introduction
Lori here, welcoming you to another edition of Real English Conversations at Better at English dot com, the website that focuses on real English for real people. I will warn you right away: the topic of today’s conversation could be considered somewhat provocative: silicone breast implants. So you should listen further only if you are not offended by that topic.

Before we get into the conversation, I have a question for you listeners. You know, I love making these casts to help you learn English. However, transcribing them – particularly writing up the vocabulary notes – is very time consuming. So I would like to know if you learners of English out there actually use the transcripts, in particular, the vocabulary explanations. There is a poll in the sidebar of the website where you can vote. I will leave the poll up until I have enough votes to get a good idea of what my listeners want. You can also email me or post in comments on the website or call the voice mail line at .

This conversation is much longer than usual, so I’ll shut up now and let you get to it. Enjoy!

L: What is your take on the whole silicone implant thing?

M: Umm… Do you mean…Do I….Well I don’t… [laughter ] What a question! Umm, well, aside from the “enhancement” aspect of it — I thought silicone implants…I thought were kind of dangerous. But as far as the enhancement goes, I can tell you I once took an online survey…

M: …which showed a series of pictures of naked breasts…

M: And you had to click a checkbox and say whether they were natural or enhanced.

M: And I can tell you I got them all correct.

M: Umm, so I, you know, I think they look fake. I’m not impressed…with that sort of, that sort of thing.

L: …which I know that, I mean, you’re a healthy, red-blooded man, you must have some experience with men’s magazines.

M: [laughs] How can we put this delicately? Yes, I am familiar with these things.

L: Would you say that, the models that you see in the magazines, that they [their breasts] are real or fake?

M: Most of the ones that that I see tend to be fake… But I can tell you this: and that…when a model comes along who IS natural, they tend to be much more popular…

M: Yes, I think so, but they’re few and far between because so few people are really built that way.

L: Well, yeah, you have to be caref…careful with the word “perfect” as well…

L: Because that implies a value judgment. 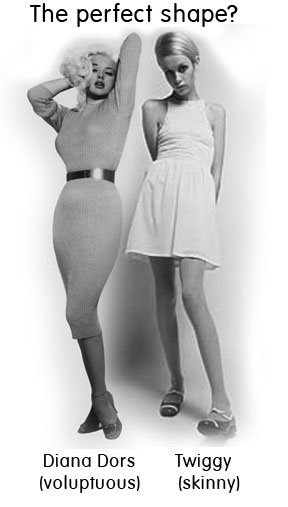 M: In the 50s compared to the 60s compared to the 70s — what they would, I mean I would say “perfect” — the ideal shape for the Hollywood starlet kind of sex symbol, umm, has changed. I mean, the 50s the accent was on the breasts, and it was quite a voluptuous look, I mean Marilyn Monroe or Diana Dors, or somebody like that. I mean, the 60s it was the legs, you know, the mini skirts and this kind of thing, and the skinny thing. And the 70s is a little bit more back to a fuller figure. And then I think it all went horribly wrong in the 80s.

M: Well there’s the plastic surgery thing for one thing.

L: Even if a lot of it is…It’s implied. But I would have to agree with you, that, you know — I don’t read women’s magazines.

L: And I think that a lot of the problems that I’ve had as an adult, with my own self-esteem and, you know, problems that you have about how you feel about yourself, are…they sort of have their root in reading my mother’s women’s magazines, from a very very young age…

L: …I was a really really, really early and really eager young reader. I would read anything I could get my hands on.

L: And so from the age of, probably six or seven, I was reading my mother’s women’s magazines

M: Right…well, do you know this kind of transfers in the same way to males…I can tell you that I was also very keen reader when I was young…

L: Exactly. And then you see when you’re watching TV, you know, mainstream junk TV, how, you know, it’s the beautiful people who good things happen to…

L: ..the beautiful woman who gets rewarded and… 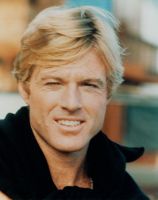 M: Right, and the villain in the movie is usually very ugly because, you know, we’re not supposed to sympathize with this.

L: Exactly, and we all know…

M: And the hero is a fantastic chisel-jawed, rugged-looking guy.

M: And the love interest is a stunningly beautiful…It’s predictable.

Thanks for tuning in to this edition of Real English Conversations. As always, you can find a full transcript of the entire cast, plus vocabulary explanations, on the website – www.betteratenglish.com . And please stop by the website and cast your vote in the transcriptions poll in the sidebar.

That’s all for now. See next time!

Have to
To have to do something means you must do it. Here Lori uses “have to” because she feels such a strong desire to ask Michael’s opinion that doesn’t have a choice. She must ask him.

Your take on
Somebody’s take on something means their opinion or ideas about it.

Thing
Lori and Michael use the word thing 11 times in this conversation, and with several different meanings. In this example, thing means “overall issue” – everything related to the phenomenon of silicone breast implants.

Enhancement
To enhance something means to make it more prominent, salient, or noticeable. Enhancement is the noun form. Here Michael is trying to find a socially acceptable way to talk about women making their breasts larger with silicone implants.

As far as the enhancement goes
The phrase as far as X goes is an idiomatic way to say, “My opinion on X is” or “I think that X is” or “concerning X.”

Say
Here Michael didn’t actually say anything by speaking, he transmitted his message by selecting from the available answers on the survey. The verb say can be used even when you (or objects!) transmit a message in various ways. For example, “This book says that men are stupider than women” or “Darn, that sign says ‘no parking,’ so we can’t park our car here.”

Men’s magazines
Men read all kinds of magazines, but when people talk about men’s magazines they usually mean magazines that feature scantily clad or naked women. Playboy magazine is a good example.

Put this delicately
To put something delicately means to say something unpleasant or rude in a way that will not be offensive.

Models
In this conversation, models are women whose profession is to look sexy in photographs in men’s magazines. In general, a model is a person who is employed to be photographed or painted.

Comes along
To come along is a phrasal verb that means to appear or to arrive at a place.

Implies
To imply something means to communicate an idea without saying it explicitly or directly.

Hollywood starlet
A starlet is a young, attractive, hopeful actress who (usually) shows some sign of possible fame and success. It is often used in a disapproving way (compare wanna-be).

Sex symbol
Sex symbols are famous people who many people in our society consider sexually attractive.

Accent
If the accent is on X, it means that X is considered very important.

Skinny
Skinny (adj.) means having an extremely thin body, usually to the point of looking unhealthy. Sometimes this is considered attractive and desirable from a fashion point of view.

Fuller figure
A woman’s figure is her overall body shape. If her figure is full, it means that her shape is curvy. A woman’s curves are mainly created by her body fat. Describing a woman as having a full figure can either be a compliment or an insult, depending on who says it and how they think women should look to be considered attractive.

Bombarding
To bombard somebody with something is phrasal verb that means to direct an overwhelming amount of something at someone.

Measure up
To measure up (to something) is a phrasal verb that means to be good enough, or to be as good as something or somebody.

Self-esteem
Self-esteem is your belief and confidence in your own value and abilities.

Have their root
If X has its root in Y, it means that X is (more or less) caused by Y.

Women’s magazines
Women’s magazines traditionally feature a contradictory mixture of recipes for delicious (and fattening) food, diet and exercise plans, and articles about how to be beautiful, sexy, and successful. Being beautiful and sexy is related to looking and behaving a certain way (dictated by the magazine articles either overtly or covertly). Women’s magazines also feature advertisements and hidden or overt sales pitches for products to “help” women transform themselves into the very ideals created by the magazines. Lori sees these magazines for the garbage that they are, and chooses not to read them.

Early
If you describe someone as an early X, it means that they started doing X at a relatively early age.

Eager
If you are eager to do something, it means that you are interested in it and want to do it very much.

Get my hands on
To get your hands on something means to obtain something.

Keen
Keen is a synonym for eager (see above).
Got the impression
To get the impression of/about something means that you form an idea or opinion about what it is like.

Villain
The villain in a story/book/film is the person who harms other people. Usually we do not like the villain. A villain can be either a man or woman.

Hero
The hero (female form heroine) in a story/book/film is the person who is good or does good things. We like the hero and want to see him succeed.

Chisel-jawed
A chisel is a tool for carving stone. Sharp and attractive facial features can be described as chiseled. So a chisel-jawed man is a man who has a striking, attractive, strong-looking jaw.

Rugged-looking
If you describe a man’s features as rugged, it means that they are strong and attractively formed.

The love interest
The love interest in a story/book/film is the attractive character whose main dramatic purpose is to attract the romantic attentions of the hero or heroine; the “romantic sub-plot” provides added tension to the story.