Hi! Lori here, welcoming you to another episode of Real English Conversations from Better at English. I’m currently on vacation in the American southwest, but during a very long car trip I had some time to put this episode together for you. In today’s conversation, my English friend Michael and I talk about whether or not I should get a pet cat. We don’t agree: Michael thinks that the cat I want is ugly, and I think it’s adorably cute. To settle our dispute, we have put a poll on the website that will allow you listeners to vote and give me your advice. If you go to www.betteratenglish.com, you can see photos of videos of the kind of cat we talk about in the conversation, and use the poll to tell me whether you think about my choice of cats.
Are you ready? Here we go!

Lori: You know we talked before about whether or not we are dog people or cat people.
Michael: Oh sure.
Lori: Yeah, and I always thought I was a dog person but I think that might be changing a bit.
Michael: Oh no! Say it isn’t true!

Lori: I was over at my friend Monika’s the other day and she has a new cat, and it is the coolest cat; I totally fell in love with her cat. It’s all I can think about now is I want a cat like that.
Michael: OK, and what is so special about this cat?
Lori: It’s naked. Have you seen those cats? Naked cats? I think they’re called Sphinx cats.
Michael: Do you mean like Mr. Bigglesworth from the Austin Powers films? 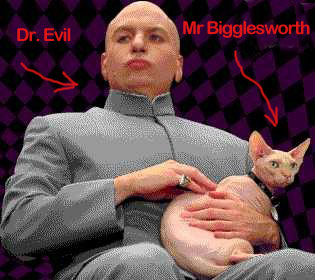 Lori: Yes, like Mr. Bigglesworth.
Michael: Hmmm.
Lori: What, don’t you like them?
Michael: Well, keep talking, I’m not convinced yet.
Lori: No, I always thought that they were really ugly, you know, these hair hairless cats. I’ve seen pictures of them and…you know, Mr. Bigglesworth in the movie isn’t really a nice looking cat, but when I saw this cat in person it was so cute! It was so incredibly cute! They are so ugly that they’re cute. 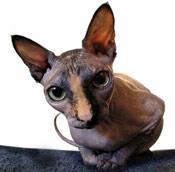 Michael: OK.
Lori: And he was so friendly and affectionate…and just alert…and almost like a dog.
Michael: And what color is he?
Lori: Well, it’s hard to tell the color because you’re just looking at their skin, but he was a dark gray.

Michael: Oh, cool.
Lori: A dark gray color with these big, beautiful, green eyes, and he just…I picked him up and was holding him and just fell in love with him, this awesome cat. And supposedly they can fetch! They’re almost…they’re more…their personality is more like dogs than cats.

Michael: So essentially what you’re telling me is that you used to be a dog person but now you feel that you’re becoming more of a cat person because you found a cat that acts more like a dog?
Lori: Yes! See, you know I’ve been feeling lonely and depressed? And, you know, people have been telling me that a cat or a dog, you know, a pet would be something good to get. But dogs are such a huge responsibility! I was thinking maybe a cat, you know, a cat you can leave for a day or two and all they really need is food and water and you don’t have to take them out.
Michael: Right, right.
Lori: And I’ve heard you can even teach them to use the toilet! So you won’t have to have a stinky litter box.
Michael: Yeah, I saw a little video of that on YouTube I think it was, of some cat using the toilet — don’t ask me why I was looking for things like that on YouTube, [laughter] but I do remember something. Yeah that would be cool. It must be difficult to train them to do that though.
Lori: You have to take it slowly step-by-step. You just move the litter box closer and closer to the toilet, and then you gradually raise it, and then you actually put it on top of the toilet, and then you put a bowl down in the toilet, and eventually they are used to it and all you have to do is get them to actually stand on top of the toilet. And once they’re doing that then you take the bowl away and that’s where they go. I’ve heard you can even teach them to flush.
Michael: Oh, goodness! I would be frightened that the cat would fall down the loo.
Lori: Oh, he would just jump out again if he fell in.
Michael: Yeah, I suppose…I guess.
Lori: They would probably only ever do that once and then they would learn.
Michael: Yeah, that’s true, yeah. And you’ll never get them back again.
Lori: Yeah, but the cool thing about these cats — a lot…the these naked cats that are hairless — a lot of people think that they’re hypoallergenic, but apparently they’re not. But since they don’t have hair, you’re not getting the hair everywhere, and you’re supposed to give them a bath a couple of times a day [this is incorrect – Lori meant “a couple of times per WEEK”], and supposedly even people who are allergic to cats, a lot of them can actually tolerate these cats.
Michael: Well, aren’t you allergic to cats?
Lori: Yeah, I used to be really allergic but now it doesn’t seem like it’s so bad.
Michael: Yeah, I’m the same. They used to make me sneeze really badly but….hmm, OK.
Lori: Yeah, so I thought maybe I would ask Monika if I could borrow her cat if they go away for vacation or something. [laughter] No, I’m serious! If they go away for vacation I could just let the cat stay here and see if I develop allergies or if he bothers me.
Michael: Right.
Lori: Because if not, I am so getting one! I want one of those cats so bad; it’s…all I can think about is my naked cat! I want one!
Michael: Well, I don’t know, I mean, it would be interesting to know what our listeners think about naked cats. Or what did you say that the proper name was, a Sphinx cat?
Lori: A Sphinx cat, or I think they’re called Canadian hairless. I’m not sure; I would have to check. And I’m, I mean, they’re the kind of thing that you either think they’re horribly ugly or you think they’re adorably cute, because they look like gremlins or even like Yoda. 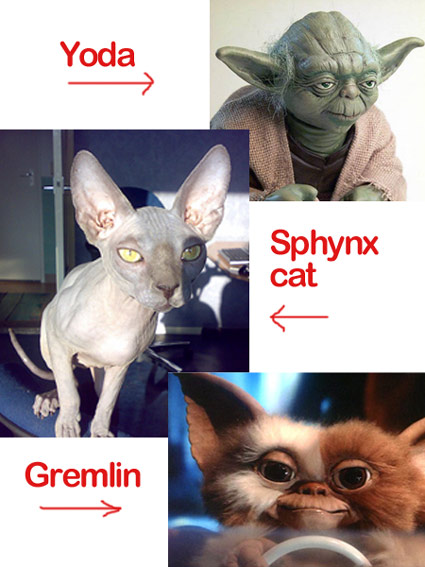 Michael: Well, that’s what I was thinking, that maybe we could ask our listeners whether they, are they for hairless cats, do they think hairless cats are attractive, or do they think they are really ugly?
Lori: Yeah, bald, naked cats. Are they, is it thumbs up or thumbs down? Should I get one or not?
Michael: Aren’t they really wrinkly?
Lori: They can be.
Michael: Because that’s the thing that looked strange to me is when they’re all wrinkled. I mean if they were smooth, you know? No hair but smooth then that would…
Lori: Well they’re fairly smooth; they have some wrinkles on their forehead, and I guess some breeds are wrinklier than others, but I just think they’re so cute. I love them, and they’re so friendly and affectionate, and I really, really want one.
Michael: Well, we’ll see.
Lori: Yeah, we’ll see. I’ll put some videos and photos up on the website so people can have a look if they want to.
Michael: OK, well I’m not convinced yet, but…
Lori: Well, you know if the answer is yes there will be no excuse: I will have to get one.
Michael: OK, well, we’ll see about that. I’ll see how many of our listeners I have to bribe to say no.

Final words
Thanks for tuning in to this episode of Real English conversations from Better at English. As always you’ll find a full transcript and vocabulary notes for this and all other Better at English episodes on our website. Make sure to go to the website, www.betteratenglish.com, have a look at the photos and videos of my beloved hairless cats, and vote in our poll to let me know what you think.

Before I sign off, I want to say thanks to everyone who has donated since the last episode. Michael and I really appreciate your generosity. Your donations are a big help to us in keeping Better at English online and free for everyone to enjoy. To contact us, use the contact form on the website, post in comments, or email us directly at info [AT] betteratenglish [DOT] com. That’s all for now; see you next time!

in person
When you see someone or something in person it means that you see them in real life rather than a picture or film.

affectionate
If a person or animal is affectionate it means that they show feelings of liking or love.

awesome
Awesome is American English slang meaning “very interesting, very impressive, or extremely good.” Many people disapprove of this usage. In standard English awesome is used to describe something that causes feelings of great admiration, respect, awe or fear.

fetch
If you teach an animal to fetch, you teach it to bring you objects. For example, you can throw a ball and the animal will go pick it up and bring it back to you. Dogs usually think this is a lot of fun, and will play fetch the same ball over and over. It is very unusual for cats to learn to fetch.

litter box
A litter box is a special box filled with special sand (cat litter) that is for indoor cats to go to the toilet in. They have to be cleaned very frequently or they smell terrible.

are used to
To be used to something (or somebody) means that you are familiar with it.

I am so getting one
The construction to be so +ing is grammatically incorrect in standard English. But it is commonly used for emphasis in informal, conversational American English, particularly among younger people. Usually the so is stressed, and the vowel sound is drawn out – the longer it is held, the stronger the emphasis.

bribe
If you bribe someone, you try to get them to do something for you by giving them something they want in return (such as money, gifts, services).