Introduction
Hi! Lori here, welcoming you to another episode of Real English Conversations from BetterAtEnglish.com. In today’s conversation, my friend Yvette returns to help me finish our earlier conversation about perfectionism and procrastination. This time we focus on the strategies that we’ve found helpful in our own battles with this debilitating problem. As always, you can find the vocabulary notes and full transcript of this podcast on our website, www.BetterAtEnglish.com.

Lori: Actually, there was one thing that I think in our last conversation about perfectionism and procrastination that we didn’t really cover…
Yvette: OK
Lori: …and that’s what you do to get out of the procrastination habit once you’ve identified that you have a problem with it. Like if you have any methods that you’ve used to help you over the fear of starting or working on whatever it is you’re supposed to be working on.
Yvette: [Laughs] You’re asking me?
Lori: Yeah, yeah we didn’t talk about that.
Yvette: How you actually get out of it? Wow…
Lori: If there’s anything you do…
Yvette: If you find out, let me know. I mean, that’s kind of tricky. Wow, that’s something to think about. Well, usually I start with a plan. You break it down and smaller bits…so… the way that I can do it sometimes is to just say, “There is…I need to do a task and let me just first open the file folder.” That’s my first step. Once I’ve got that opened up and I’ve got the file maybe even opened in my browser — whatever I needed to be in — then I can start working on it. But it really is just kicking my butt…giving myself a good kick and going, “Come on, you can do it today.” But I tend to just find 15 other things to do first, which is clear my desk…oh yeah, I need lunch…oh, I need to do to the — let me do the groceries right now instead of later, so I don’t get interrupted by that. Um, so I tried to get rid of things, but I don’t know, I try to plan it better, but that usually doesn’t work — for me anyway.
Lori: Uh huh. Well, it sounds to me, when you mention that, for example, if it’s a writing project, that you start by just opening the file….

Yvette: Yeah.
Lori: …to me that sounds like you’re breaking it down to something you know you can do that really doesn’t require any performance. I mean it’s not difficult to just open the file and look at it, but then at least you make that first step.
Yvette: Yeah, it’s…I do find though, that is the hardest step, that very first one. Once I’ve got that one, it pretty much moves on from there. Once I’ve got the file and I know what I’m looking at — and maybe part of that is that it’s a bit chaotic, especially as a writer I may have 15 drafts of a similar text, and I’m not even sure what the first one or the last one was that I used and which one I was in, and I try to make notes of this in a notebook that I keep specifically for that purpose, umm, but to know what part, what I should be working on, just that, identifying that helps. And then I can open that file in my word processor and start working, umm, and then it’s okay. And then it’s just a matter of not getting interrupted by anything or anybody.
Lori: Yeah, that’s really hard.
Yvette: Because once that interruption comes, then it’s very hard to go back to it.
Lori: Yeah, it takes you a while to get back into the flow once you’ve been interrupted.
Yvette: But it’s also kind of overcoming a sort of fear of not being able to do it. Umm, you know, when you want to start a task and you think, “Ah, I don’t know, it’s a big task; I’m not sure I can do it.” You know, to just get started and throw out the idea that it needs to be perfect, and that you know, any effort right now would be good. But by that time though, I’ve already procrastinated to a point of it almost not being possible anymore, or at least being way too late. You know what I mean? It’s like you’ve already kind of passed five deadlines at this point.
Lori: Yeah, mmm. I guess were coming round again to that idea that just getting started is often the hardest part, and by that I don’t mean like actually “started at the beginning of a project,” but maybe even when you’re working on it, like, getting started with your work period for the day, or whatever, that’s really hard.
Yvette: Yeah.
Lori: And I found, for me, there was actually a site on the Internet that had what they called a “procrastination hack“…
Yvette: Okay!
Lori: ..that I’ve actually used it from time to time, and, it, I find that it’s been quite helpful in just getting me…when it…especially for jobs that are just a matter of like, sitting your butt in the chair for a certain amount of time and just focusing on it, you know, to get it done…umm, and what they call it is the Procrastination (10+2)x5 hack.
Yvette: Okay… 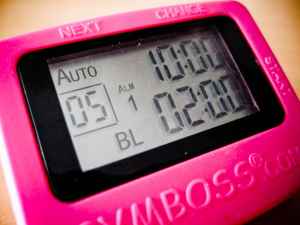 Lori: And basically what it is is you need to use a little timer, and you set your timer for 10 minutes, and the idea is that you’re going to sit down and you’re going to single-mindedly focus on your task and work on it for 10 minutes, and after that you get to take a two-minute break and just screw around and do what you want for two minutes. And after that you’ve got another 10-minute work period, and then followed by a two-minute break. And if you do that five times you’ve basically spent an hour, of which 50 minutes you’ve been productively working on your task. And it sounds, like, really kind of cheesy and stupid but when you’re, like, so desperate, and like, can’t find any way to get started and you know that “Well, if I just do that first 10 minutes, then I can spend two minutes dorking around and doing whatever I want,” it just kind of makes it more concrete…that you have the specific work period…
Yvette: I see..
Lori: And it’s not too long, I mean, 10 minutes is only 10 minutes. And I’ve found — I don’t actually use it anymore — but I have used it in the past, and I found that it was actually, kind of a way to make the task seem less daunting. You know, you’re putting a limit on it, and you’re giving yourself a chance to screw around, and…umm, yeah, I found it really useful.
Yvette: I see. I would find 15 ways around that.
[Laughter]
Lori: Really?
Yvette: I would probably spend most of the time figuring out how I could make that work in a different way!
Lori: Uh huh!
Yvette: Now, what I do do, especially when I’m writing and I know…I mean, it’s to tell myself I need to write for four hours today.
Lori: Umm hmm.
Yvette: And then I have a stopwatch, and every time I stop writing I just hit the stopwatch. And I go, “Well, that’s it…you’re not working right now.” And umm, at the end of the day I just have to have four hours’ worth of work, and I don’t care how I get there, but I just do it that way. And the advantage of it is that…I discovered, that, the amazing amount of work you can do in four hours. You know, you’re not thinking about, it. It’s so much work, and, yet you don’t feel like you’ve worked all that much ’cause it’s only four hours in a day, big deal. But, that helps.
Lori: Yeah, to me that sounds like a similar idea, except that you’ve…you’re a lot more flexible in the time… that you’ve set the limit to four hours, and…
Yvette: ‘Cause I would hate to get interrupted by anything. You know, if I got 10 minutes of writing done I’m in it, and now I don’t want to stop writing, I just want to keep going.
Lori: Yeah, well that’s kind of the idea, is that, you know, once you then get in the flow you wouldn’t need to do it.
Yvette: Okay, that’s the idea.
Lori: It’s really more for when you’ve got this huge resistance to just even getting started and even…are completely blocked and just can’t get going at all ’cause you’ve built up to be this huge thing, but then kind of telling yourself, “Well, I only need to do 10 minutes.” To me that was like a huge help.
Yvette: It’s a very big mental exercise, isn’t it?
Lori: Mmm.
Yvette: It’s not about the physical or the time … “you don’t have the time.” You do have the time, it’s just that there is a mental block.
Lori: Yeah.
Yvette: And you’re not sure what to do next. Well, you can think of a lot of other things to do, and it’s just because for some reason you just don’t feel comfortable, or you feel that the time needs to be right, or the atmosphere, or that it’s too warm or it’s too cold ,or you know, 15 other things running through your mind: “What else can I do?” Instead of the thing you should do.
Lori: Yeah, umm… a lot of those things you mention, like finding all these other things that you want to do instead of the thing you should be doing…I think those are all kind of avoidance strategies to protect you from, you know, the thing that you’re afraid of in…to begin with is that, “Oh, it won’t be good enough” or “It’s going to be hard” or “People aren’t going to like it.” You know, those are all the things going in the back of your mind that have you…
Yvette: “What’s the point of this?”
Lori: Yeah, Exactly. Exactly. So it’s all just avoidance.
Yvette: That’s what it is. If…umm…when I’m…as a writer, I often come across things that I’m not sure in the end to anyone would even care about or like, and I have to do it all because I like it, and then it’s harder. But on the other hand, I do have to say that once I make it enjoyable for myself, I give myself, say, a treat at the end of it. Like, I give myself some reward. Then I can actually get it going. You cannot…you know, there’s one thing I really want to do, a movie I really want to see, or a TV show I don’t want to miss, then I’m telling myself, “You can’t watch it until you finish the task at hand.”
Lori: Okay, yeah that’s a good strategy.
Yvette: So not punishment but reward.

This concludes our conversation on procrastination and perfectionism, at least for the time being. Now if I can only find the perfect topic for the perfect podcast, we’ll be back soon with another episode. Until then, you can find the archive of all our old episodes as well as the full transcripts and vocabulary lists on our website, BetterAtEnglish.com. Thanks for listening, and bye for now!