Hi! Lori here, welcoming you to another episode of Real English Conversations from betteratenglish.com. In today’s conversation, my British friend Michael and I discuss our reactions to a presentation about “What leads to success,” given by Richard St. John. Everyone wants to be successful, right? But have you ever wondered what it is that leads to success? Richard St. John spent several years interviewing hundreds of successful people, asking them about the factors that led to their success. In a three-minute presentation at the TED conference, he presented his findings, some of which you might find surprising. I highly suggest that you watch the video either before or after listening to this episode. I have embedded the video on our web site, www.betteratenglish.com. You can also find it on the TED web site, www.ted.com.

By the way, the technical difficulties that I mentioned last week have supposedly been resolved now — please do let me know if you have any further problems downloading our audio files.

Lori: I have a lot of business English students when I teach in the classroom and a lot of times we end up talking about things like success and what leads to success, and it’s interesting that many of them mention the element of luck.
Michael: Right, OK.
L: That luck is important to success but as you know, since you’ve seen that fantastic video on the TED Talks web site by Richard St John…
M: Sure.
L: He doesn’t mention luck at all.
M: Right, I’m a firm believer that people can make their own luck. I mean what people regard as being luck, you know, you can actually create to a degree.
L: Right, right. I think a lot of what people consider luck is…is really…it’s down to how you respond to the opportunities that come your way.
M: Yes, very good point, yeah.
L: Seizing the opportunities. But was there any point in the video that you thought was particularly interesting?
M: Umm…yes, actually there was. Something very close to my heart is a lot of people think in the same way that you say that these folks are saying they think that luck is important, that people think that innate talent is something that you have to have to be successful. And in the video that we saw, the point about getting good at something, and it’s not about…umm…having some innate talent, it’s all about practise, practise, practise.
L: Mmm, definitely yeah.
M: You know, and creating your own, you know, if you want to be good at something then you practise you…and you make yourself skillful at doing something; it’s not that, you know, people are all…err…you know, born that way it’s just…
L: Right.
M: It’s hard work and that’s what you do, you know?
L: Yeah, there…I mean, talent of course, if you have…umm…a predisposition that favours a certain talent or…
M: Yeah.
L: …of course that’s going to help. But at the end of the day, you really do need to put your nose to the grindstone and do the work and get really, really good at what you do.
M: Sure.
L: Umm…I thought one of the interesting things in the video was the idea of passion being so important.
M: Oh yeah, yeah definitely.
L: And that people who really love what they do — of course you’re going to tend then to want to work harder and put the time and effort into it — and the funny thing is that if you love what you do and are really passionate about it and work really hard, the money kind of comes automatically.
M: Well, yeah I…I think with that point as well is that if you really love what you’re doing, then hard work doesn’t actually seem like hard work.
L: No, that’s another point he takes up that it could actually, you know, that that the people he interviews — all of these 500 successful people — that they do work very hard but that they have fun while they’re working.
M: Right, right.
L: Yeah, and another thing that I thought was important was the idea that you have to push yourself through all kinds of setbacks and hard times.
M: Yeah umm…I mean that’s…that’s something…err…all the time…is that like the motivational sort of thing? You’ve got to always keep going and regardless of all the things that get in your way; it’s not going to be a smooth ride is it? So…
L: Yeah. you have to be prepared for setbacks and all kind of problems that get in your way and if you just give up when things get tough…
M: Yeah.
L: You will never succeed. 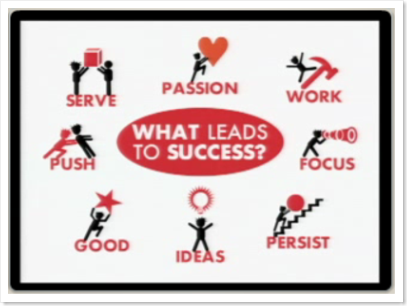 M: I’m sure in a lot of cases, people who’ve been successful, it’s not the first idea that they had or it’s not the first person that they brought it to that took them on and financed them or helped them, you know? I mean, how many venture capitalists said no before, you know, umm, finally one said yes?
L: Yeah I’m sure that there’s a lot in that…that a lot of successful businesses have pushed through setbacks and hard times and just not given up.
M: Yeah, it’s not like you succeed and — I mean, sure, maybe some people succeed first time — but I don’t think that’s very common.
L: Exactly…umm…yeah. And then another thing that I thought was really interesting was the idea of having to focus.
M: Yeah…umm…I mean if you’re going to…if you’re going to do something…I mean I think they’re all kind of connected in some way, these things…I mean, the idea about getting good at something…umm…it’s not just enough to be good…umm…at doing something; you’ve got to apply yourself…
L: Right.
M: ..and really concentrate.
L: Yeah, and there’s the idea of being a jack-of-all-trades, master of none!
M: Oh…
L: You know, trying to be too good at too many things; it’s never going to work, It’s better to pick the thing that you really are passionate about and that you really, really want to devote yourself to.
M: Yeah, that was a good one, yeah.
L: Yeah and…and just push. So I thought that was really interesting…umm.
M: Nice and positive as well.
L: Yeah, I really love…it’s a fan-…don’t you think it’s a great presentation?
M: Yeah, I mean I thought it was very concise and to the point and also…
L: Yeah.
M: …the positive message, because the idea about luck and innate talent is a bit disheartening to people because you have…there’s nothing much you can do about those things.
L: Right. Well, the background is that he goes around to high schools and gives this talk and normally, I guess it takes him about 2 hours, but at TED he condensed it down to 3 minutes, which I…I was actually quite impressed…
M: Yeah, me too.
L: …by that. But I think his slides are really great too; you know you don’t see…I mean there are some bullet points, but it’s not heavy. There’s not too many words on the slides and he’s got nice images and it’s…it’s just a really tight, interesting and funny presentation as well.
M: Yeah. Well it’ll be good for our…our…our…listeners can take a look at the…
L: Yeah, yeah I hope so!
M: …at the video
L: And I hope that the…the video, if they do watch it that it will inspire them as much as it inspired me.
M: OK!
L: Yeah!

That’s all for today. If you found today’s topic interesting, we’d love to hear your comments. You can leave a comment at our web site, www.betteratenglish.com, or e-mail us at info AT betteratenglish DOT com. And remember, your continued donations make our shows possible. Bye for now!

down to
If X is down to Y, then X is the main reason for Y, or the main thing that is important for doing Y.

close to my heart
If something is close to your heart, it means that it is very important to you.

predisposition
To be predisposed to/towards something means that you are likely to behave in a particular way or to exhibit certain characteristics.

setbacks
A setback is something that causes delays in success or prevents you from making progress.

a smooth ride
The idiom a smooth ride means having an easy, trouble-free time doing something. The opposite is a bumpy ride, which means facing lots of difficulties and problems.

given up
If you give up, you stop trying.

heavy
In this context, heavy means tedious and boring.

slides
In presentation software such as Powerpoint, each “page” is called a slide.

tight
If you describe a talk or presentation as tight, it means that it was concise and well constructed, with no unneeded parts or excess.

• See the original video and many other great presentations on the TED website.
• Richard St. John’s webpage about success, and another video presentation.
• You can even buy his book about success on Amazon.